The early 1960s saw a string of popular Cold War spy movies and television shows that illuminated the complexities of life in Cold War America. Movies like Ian Fleming’s Dr. No and From Russia with Love popularized the spy movie, while movies like Dr. Strangelove and The Manchurian Candidate grappled with the fear that the government couldn’t be relied on to guarantee American safety. This paper draws upon these movies from the years 1962-1964, the events surrounding the release and consumption of the movies, previous historical research into the culture of the Cold War, and the reaction to and reception of these works. In doing this, this paper attempts to understand how Americans understood the fears and adversaries they faced, and investigates how the public confronted and coped with those fears.

This paper consists of two primary narratives. The first explores the way in which the spy movies grappled with the new realities of the changing Cold War by introducing heroes who dealt with realistic crises in satisfyingly unrealistic ways. In that way, the spy movie became a  constructed coping mechanism to the randomness of the Cold War, wherein the actions of one person could single-handedly keep the country safe. The second part of the paper centers on films that explore the cultural fears that the spy movie comforts. Those movies confront the fear that Americans had just as much to fear from their own leadership as from the global communist threat. These movies present the antithesis of the spy movie, the truth that one person cannot save the world, but one could end it. 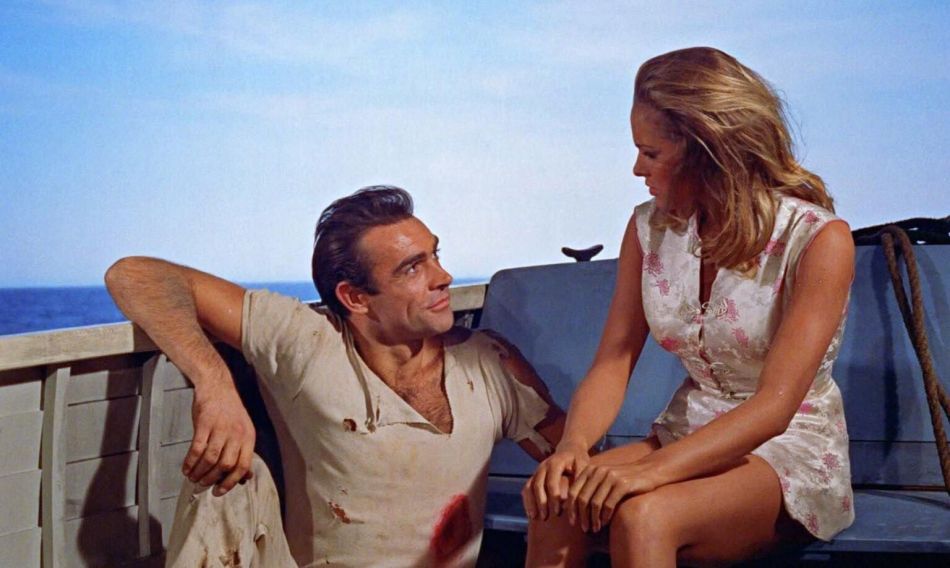 A bikini-clad Ursula Andress singing “Underneath the Mango Tree,” walking out
of the Caribbean waters. A debonair spy in an immaculate tuxedo, stalking the
overnight train to Montenegro for his cunning adversary. A brainwashed soldier,
staring blankly at his target. A mad doctor in a wheelchair, standing up suddenly
and screaming, “Mein Fuhrer! I can walk!” The Cold War films of the early 1960s
have reached iconic status as part of American popular consciousness. Movies like
Dr. No and From Russia with Love, the first two installments of the adventures of
Mi6 Special Agent James Bond 007, and the classic Cold War thrillers The Manchurian Candidate and Dr. Strangelove, or, How I learned to Stop Worrying and Love the Bomb remain a vibrant part of the pop culture zeitgeist. The films were not made in a vacuum, however. Examining these films within their historical context reveals how they interacted with concurrent historical events and the reasons for their initial popularity. Embedded within the films is a wealth of information pertaining to how Americans perceived the nature of the Cold War. They illustrate how the public confronted and coped with the Cold War through shared popular culture.

The films listed above can be viewed in two categories, though overlap is inevitable. The first is the “spy” movie, which reduces the multi-layered tangle of international relations to the more navigable level of interpersonal relationships. The spy movie was a coping mechanism constructed for the unpredictability of the Cold War, wherein the actions of one person could single-handedly keep the country safe. The second type of film, which I will call the anti-spy movie, deconstructed the cultural fears that the spy movie comforted. Those movies confronted the anti-communist and “Red Scare” narrative fed to the American people throughout the 1950s and deconstructed it. The anti-spy movie examined the fear that Americans had just as much to mistrust from their own leadership as from a foreign communist state. They presented the antithesis of the spy movie, the acknowledgment that one person could not save the world, but on the contrary, one could end it. Those two opposites, examined together and in their historical
context, show the turmoil, confusion, anxiety, and complexity of the Cold War world that Americans lived with during the 1960s.

In 1963, the American moviegoing public was introduced to the iconic spy James Bond. In contrast to the “Red Scare” movies of the 1950s, Bond faced new types of enemies: enemies not always Soviet, or even communist, but enemies who existed within the framework of the Cold War, and enemies who reflected real world issues. Ian Fleming’s Dr. No premiered in May 1963 in the United States, mere months after the Cuban Missile Crisis, making the movie’s plot lines reverberate with Americans. The Soviet space program had successfully launched the first satellite and the first man into orbit while the U.S. space program had lagged behind. President John F. Kennedy had challenged the American people to put a man on the moon by the end of the decade, yet their Army and NASA had suffered public embarrassment while the Soviet Union had successfully placed a man in orbit before them, shaking the confidence of the American people. Dr. No offered both a tacit understanding of the fears America faced in the early spring of 1963 and an avenue of escape from those problems.

Dr. No at its heart is escapist fun; Bond is immediately presented as “confident, intelligent, lucky, serious, disarming, sexually attractive to women, nimble-witted and both physically and mentally prepared to meet any challenge presented to him.” He was seen as the type of man who could keep the Western world in command, “the very model of the tough, abrasive professionalism that was allegedly destined to lead [the west] into the modern, no illusions, no holds barred post-imperialist age.” When audiences sat down to Dr. No, their hero embodied perfection in the postwar age: a man capable of nimbly navigating the confusing new conflict which Americans dealt with in the 1960s. The character of Bond allowed audiences to imagine themselves making the same dynamic decisions, and gave them comfort in his own assurance of superiority over his threats.

Dr. No is full of relevant concerns for the viewing public. The majority of the film takes place on or around the island of Jamaica, just south of the communist stronghold of Cuba, the island that had so recently captured American attention. For much of the 1950s, Americans had been preoccupied with the U.S. and U.S.S.R.’s struggle for primacy in Europe, and gave little thought to their “backyard,” as Latin America was often called. After the Cuban Missile Crisis and nationalist revolutions that erupted in the late 1950s and early 1960s, Latin America could no longer be ignored. Now, the location of Dr. No’s secret base near Jamaica “stirred the anxiety of Western viewers regarding the safety and security of America’s Caribbean neighbors with Castro . . . only 90 miles off the
coast of Florida.” The threat of consistently fighting liberation movements influenced by the Soviet Union in America’s soft underbelly was a horrifying thought for American audiences. For the first two decades of the Cold War, the communist threat was safely across an ocean. The combination of the Soviets launching their first Intercontinental Ballistic Missile (ICBM), nationalist movements undermining American hegemony in Latin America, and Americans perceiving that their nation was falling behind the U.S.S.R. in the technology race, contributed to the anxiety that the Cold War was coming dangerously close to American shores.

The primary threat of Dr. No is the fictional disruption of the contemporary Mercury Space Program, which, while the picture was in production, had not put a man in Earth orbit. Americans were worried about falling behind the Soviet Union, and “Dr. No tore at the bowels of Western Society as [he] played havoc withUnited States Missile tests,” with his attempts to undermine America’s space program. Furthermore, he was doing so from a hidden base, close to Cuba, in a place where the United States could not interfere without risking another standoff with the Soviet Union. By choosing to adapt Dr. No first, instead of another of Ian Fleming’s books, the moviemakers “cleverly connect Bond’s adventure to the real concerns of the American audience about the actual Cold War space race, perhaps making Bond’s story seem more realistic.” This grounded the escapist fun in a subconscious realism, which only served to demonstrate the fun and satisfaction of seeing Bond claim victory over the forces of evil.

These issues were tackled by a film that many critics saw as ‘popcorn entertainment,’ an entertaining but brainless excuse to visit the Caribbean for a few hours. “Nonsense, you say. Of course it’s nonsense—pure escapist bunk, with Bond . . . doing everything (and everybody) that an idle day-dreamer might like to do.” Because Dr. No is escapist entertainment, there was very little doubt that Bond would manage to defeat Dr. No, save the American space race, and sleep with Honey Ryder as a bonus. He was able to succeed in a fashion unburdened by reality, infiltrating an island near Cuba, single-handedly destroying a secret base, and escaping without international incident. He accomplished what the American government had not been able to do. He could police America’s soft underbelly and keep the West safe from threat—all while wearing a sneer, a suit, and his Walther PPK. Dr. No evoked relevant fears gnawing at the confidence of Americans while solving them in clear, unrealistic, and satisfying ways…

Read the entire essay at CONCEPT.

This essay was originally published in CONCEPT, a publication of Villanova University