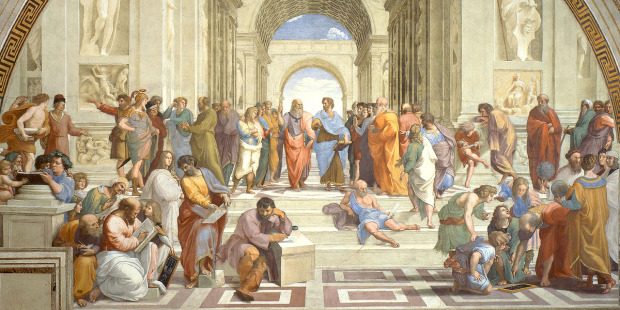 The following exhortation was delivered to the first graduating class of BASIS Goodyear High School on May 17, 2019. Minor changes have been made to protect the identities of the graduates. This speech reflects the thoughts and views of the author alone. They do not represent the official views of BASIS Ed.

Esteemed Graduates. Congratulations on your graduation! Graduating with the BASIS diploma is a fine accomplishment, and you should be very proud of what you have accomplished. That said, though it does not feel like it, your lives are really just beginning. And today, I deem it necessary to give you one last lesson, perhaps the most important lesson, as you are now choosing what course of life you will embark upon. Let me tell you a story.

It is 399 BCE and Socrates has just been unjustly sentenced to death by an Athenian jury for impiety and for corrupting the youth of Athens. He stands before that jury, and delivers these parting words:

“When my sons are grown up, I would ask you, O my friends, to punish them; and I would have you trouble them, as I have troubled you, if they seem to care about riches, or anything, more than about virtue; or if they pretend to be something when they are really nothing,—then reprove them, as I have reproved you, for not caring about that for which they ought to care, and thinking that they are something when they are really nothing. And if you do this, both I and my sons will have received justice at your hands. The hour of departure has arrived, and we go our ways—I to die, and you to live. Which is better God only knows.”

Why does Socrates deliver these parting words? Why does he ask this favor of those that have just sentenced him to die? Probably, in my opinion, to make yet another statement about the best way to live. You see Socrates, was obsessed with answering the following question: “what course of life is best?” And, according to the writings of his protege, Plato, it seems that Socrates believed the best course to follow in life was one that pursued truth, goodness, virtue, and love, among other things. And these attributes were the exact opposite of those commonly pursued in Athens at the time; you see, the Athenians, it seems, were concerned primarily with wealth, status, and power. And so Socrates stands before his murderers and exhorts them one last time to live a better life. But he doesn’t simply exhort them, he exhorts us here today. And through Socrates, I now exhort you to deeply examine the course of life you are about to take.

For the false ways of living that gripped Athens in the 4th Century, BCE are the same ones that plague and have plagued the United States since its inception. We can read about this plague in the writings of Henry David Thoreau.

You see, in the 1840s Thoreau observed an America that was, even in his day, absolutely dominated by materialism and the desire for wealth and status. As he walked from farm to farm in Concord, Massachusetts, he noticed that his fellow citizens were absolutely working themselves to death, not to make ends meet, but so they could have as large a farm and as grand a house as their neighbors had; so that they could have fine clothes and other material goods that supposedly proved their status, their worth. What these farmers did not realize was that they were exchanging their very lives for that supposed wealth and status. Thoreau put it this way:

“But men labor under a mistake. The better part of the man is soon plowed into the soil for compost. By a seeming fate, commonly called necessity, they are employed, as it says in an old book, laying up treasures which moth and rust will corrupt and thieves break through and steal. It is a fool’s life, as they will find when they get to the end of it, if not before.”

“It is a fool’s life, as they will find when they get to the end of it, if not before.” I think many, if not most Americans live this sort of life today. They chase money, status, or power…and they work themselves to death in order to obtain it. But this sort of life is not fulfilling.  Let me tell you a story from my Army days that I think will illuminate this further.

I’ll never forget a retired officer I encountered when I was a new Army officer. All of the officers in my unit were attending a professional development seminar, and this person was seemingly there to inform us how we could manage our careers and become as successful as he had been… since he had been a Colonel. It was clear, however, that this officer was struggling with no longer wearing the uniform; he was missing the status and power that came with his rank. So he stood there in civilian clothes, telling us story after story about how great his career had been—about how great his life had been. But by the way he told it, it almost seemed as if he were dead now, as if his entire life had come to an end when his career came to an end. So he stood there telling us about his deployments and his great deeds, and his world travels, and it was impressive. And we should certainly honor this man for his service to our country. But then he let slip this incredibly telling statement, “I didn’t really raise my kids, so I’m getting to know them now.” This man was in his sixties and his children were all grown and out of the house.

In that moment my heart broke for that man. He spent his life chasing success and promotion and status, and it was obvious that his success had not brought him joy or happiness. In fact, he had very likely sacrificed his joy and happiness to achieve that success. And while this man gave his life over to success, it’s just as easy to do it for money and material possessions. One need only read the biographies of the rich and famous to know that success and wealth will not bear a fulfilling life.

Socrates said “…the unexamined life is not worth living.” And I think he was absolutely right. So before you dive into your pursuit of the so-called American Dream, I would challenge you to deeply examine the course of life you are about to take. Examine why you have chosen your particular university, and why you have chosen your particular course of study and your chosen career. And make absolutely certain—whatever your chosen profession—that your course of life will not be in pursuit of wealth, status, or power. Instead, ensure your course of life is the path that vigorously pursues the true, the good, the beautiful, the virtuous.

As I close, I will leave you with one final thought from Thoreau: “the cost of a thing is the amount of what I will call life which is required to be exchanged for it…”

Again, congratulations on your graduation. I wish you the best of luck in your future endeavors.

Dalton, Dennis. “Socrates and the Socratic Quest.” Lecture. https://www.thegreatcourses.com/courses/power-over-people-classical-and-modern-political-theory.html. The lecturer is describing Plato’s Gorgias. This lecture served as the inspiration for this speech.

This work is licensed under a Creative Commons Attribution 4.0 International License.