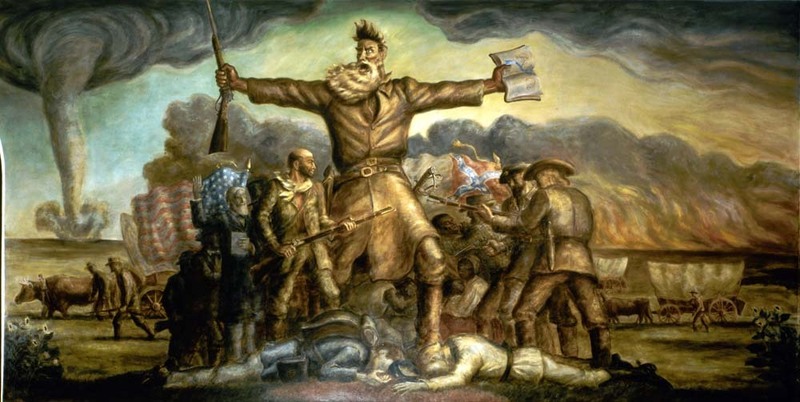 *Assign a textbook reading on John Brown’s Raid the night before the seminar.

Synthesis: If students have had an opportunity to read these other works, this would be a great time to guide the discussion towards Thoreau’s Civil Disobedience or Huck’s moral dilemma in Adventures of Huckleberry Finn.

“It is the old truth oft repeated, and never more fitly than now, ‘a prophet is with- out honor in his own country and among his own people.’ Though more than twenty years have rolled between us and the Harper’s Ferry raid, though since then the armies of the nation have found it necessary to do on a large scale what John Brown attempted to do on a small one, and the great captain who fought his way through slavery has filled with honor the Presi- dential chair, we yet stand too near the days of slavery, and the life and times of John Brown, to see clearly the true martyr and hero that he was and rightly to estimate the value of the man and his works.”

On 16 October 1859, John Brown led a band of 21 men on a raid of the federal arsenal at Harper’s Ferry, Virginia. The goal of the raid was to seize arms and initiate a general slave rebellion in the South. Brown failed in achieving his short-term goal; slaves did not rally to his cause and he and his men were quickly surrounded and defeated by federal soldiers under the command of Col. Robert E. Lee.

Brown himself was tried for treason by the state of Virginia and convicted. At his trial he proclaimed, “Now if it is deemed necessary that I should forfeit my life for the furtherance of the ends of justice, and mingle my blood further with the blood of my children and with the blood of millions in this slave country whose rights are disregarded by wicked, cruel, and unjust enactments, I say, let it be done.” Brown was executed on 2 December 1859.

While Brown failed in starting a slave revolt, he did succeed in feeding the fires of sectionalism. He became a martyr of abolitionism in the North. Yet, the South saw his raid as proof that the North was determined to foment violence and anarchy south of the Mason-Dixon line. Ultimately, his raid and the fear it inspired helped push Southern states towards secession.

Brown is an enigmatic character. He has been called a hero, villain, terrorist, liberator, insane person, zealot, patriot, traitor, and many other things. Which of these labels is accurate?

“He was by descent and birth a New England farmer, a man of great common-sense, deliberate and practical as that class is, and tenfold more so. He was like the best of those who stood at Concord Bridge once, on Lexington Common, and on Bunker Hill, only he was firmer and higher principled than any that I have chanced to hear of as there. It was no abolition lecturer that converted him. Ethan Allen and Stark, with whom he may in some respects be compared, were rangers in a lower and less important field. They could bravely face their country’s foes, but he had the courage to face his country herself, when she was in the wrong.”